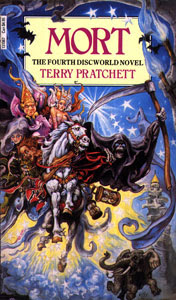 The great fantasy author, Sir Terry Pratchett, O.B.E died on March 12,2015--after suffering from a long battle with Alzheimers. One of the earliest influences on my sometimes smartassed style of writing was his watershed fantasy series, Discworld.

Sir Terry took J. R. R. Tolkien, Robert E. Howard, H. P. Lovecraft and William Shakespeare, and many other mythologies, folklores, and fairy tales, and mashed them up in this hilarious series of tales. There were 39 books in this trilogy! Talk about prolific.

One of my favorite books in the series is "Mort." It is the 4th book and is the first to give Death the main storyline.

But First, The Blurb:
Terry Pratchett's profoundly irreverent novels are consistent number one bestseller in England, where they have catapulted him into the highest echelons of parody next to Mark Twain, Kurt Vonnegut, Douglas Adams, and Carl Hiaasen.

In this Discworld installment, Death comes to Mort with an offer he can't refuse -- especially since being, well, dead isn't compulsory.As Death's apprentice, he'll have free board and lodging, use of the company horse, and he won't need time off for family funerals. The position is everything Mort thought he'd ever wanted, until he discovers that this perfect job can be a killer on his love life.


MY REVIEW:
As a teenager, Mort had a personality and temperament that made him rather unsuited to the family farming business. Mort's father, named Lezek, felt that Mort thought too much, which prevented him from achieving anything practical. Thus, Lezek took him to a local hiring fair, hoping that Mort would land an apprenticeship with some tradesman; not only would this provide a job for his son, but it would also make his son's propensity towards thinking someone else's problem.

The conversation between Lezek and his brother Hamish as they discuss Mort's future in the opening pages is hilarious and quite revealing in its simplicity.

In this snippett, Lezek and Hamish are observing Mort as he attempts to frighten some birds away from the crop. "He's not stupid, mind" said Hamish. "Not what you'd call stupid."

"There's a brain there all right,"Lezek conceded. "Sometimes he starts thinking so hard you has to hit him round the head to get his attention. His granny taught him to read, see? I reckon it overheated his mind."

At the job fair, Mort at first has no luck attracting the interest of an employer. Then, just before the stroke of midnight, a man concealed in a black cloak arrives on a white horse. He says he is looking for a young man to assist him in his work and selects Mort for the job. The man turns out to be Death, and Mort is given an apprenticeship in ushering souls into the next world (though his father thinks he's been apprenticed to an undertaker).

Death is a great character, so completely human in his disenchantment with his career. He retires and Mort's apprenticeship takes off with some amazing ups and downs.

Death's journey to happiness is one of the more hilarious of the Discworld tales.

I love the snarky way Pratchett took clichés and ran with them. He grabbed the boring, bland, overdone themes of western literature by the tail and swung them. When he set them down they were SO much more fun to watch!

If you love fantasy with humor, and aren't afraid to poke fun at the wry facts of life, Sir Terry Pratchett's work might be for you!
Posted by Connie J Jasperson at 6:53 AM