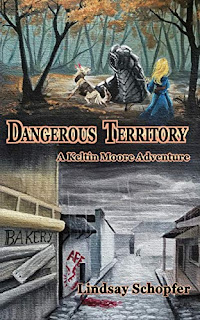 
But First, The Blurb:


The beast hunter is on a mission of mercy to save the love of his life.

Life is good for professional monster hunter Keltin Moore. His new beast hunting company is finding great success as he returns to distant Krendaria to protect its citizens from creatures of nightmare.

But when he receives word that the woman he loves is in trouble, he will leave the world that he knows behind and plunge headlong into dangers he has never faced before.

Somehow, he’ll have to sneak across a closed border, find his beloved and her family, and escort them all safely back out of the country. From dodging sadistic government agents to racing through beast-infested forests, will Keltin and his new friends survive their escape through Dangerous Territory?


The Alt-Western setting of the Keltin Moore novels is both familiar and alien. It is familiar the way the American Old West is, and alien as in – alien. Gruesome beasts, some familiar and some new abound, as do the opportunities for disaster.


Harper, the reporter from the Collinsworth Gazette, is an interesting character. Kuff, a giant tamarin hound, Wendi the kitchen girl, and an old friend, Ross, Kuff’s trainer are also good additions to the cast.


My favorite characters from previous books are all in place, Jaylocke, Bor’ve’tai and many more. We meet Angela, a woman from Keltin’s past, one with a complicated history. We also get to see more a more rounded view of Elaine, the woman who has a hold on Keltin’s affections.
I like the way Schopfer begins this novel, forcing Keltin out of his comfort zone and ratcheting up the tension all the way through to well plotted ending.


As in the previous Keltin Moore books, death and danger lurk around every corner. All in all, this is a grand adventure, one I can recommend to all lovers of sci fi westerns.


Dangerous Territory: A Keltin Moore Adventure (The Adventures of Keltin Moore Book 3) is available at Amazon.
Posted by Connie J Jasperson at 6:00 AM No comments: