The Wretched of Muirwood by Jeff Wheeler 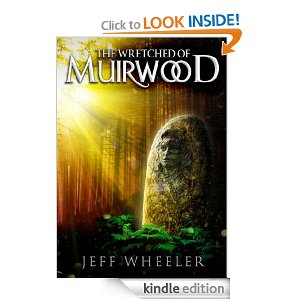 Today I am reviewing "The Wretched of Muirwood" by Jeff Wheeler. Published in 2011, this is the first book in a series, Legends of Muirwood.
The Blurb:

In the ancient and mystical land of Muirwood, Lia has known only a life of servitude. Labeled a “wretched,” an outcast unwanted and unworthy of respect, Lia is forbidden to realize her dream to read or write. All but doomed, her days are spent toiling away as a kitchen slave under the charge of the Aldermaston, the Abbey’s watchful overseer. But when an injured squire named Colvin is abandoned at the kitchen’s doorstep, an opportunity arises. The nefarious Sheriff Almaguer soon starts a manhunt for Colvin, and Lia conspires to hide Colvin and change her fate. In the midst of a land torn by a treacherous war between a ruthless king and a rebel army, Lia finds herself on an ominous journey that will push her to wonder if her own hidden magic is enough to set things right. At once captivating, mysterious, and magic-infused, The Wretched of Muirwood takes the classic fantasy adventure and paints it with a story instantly epic, and yet, all its own.
My Review:
Lia Cook is an abandoned child, left on the doorstep of an abbey as an infant. She is goodhearted, and hardworking. In many ways she loves her life, but more than anything she yearns to read and write. When Colvin is left in the kitchen, Lia hides him, though she doesn't know why. Lia and Colvin distrust each other, and Lia frequently regrets hiding him, but she does it anyway. Colvin has knowledge that Lia craves; even untrained, Lia has a raw power over magic that Colvin desires. In the world of Idumea, magic is known as "the medium" and few can bend it to their will easily, even with training.

Wheeler has created a viable and logical system of magic in the medium, and it is one of the most unique systems I've ever read. The medium is in and around everything. There is a spiritual quality to it. It is much more earthy than "the force" of Star Wars fame, and while there are certain superficial similarities, the medium is ponderous, heavy and pervasive.

The King (who is never named so far as I was able to see) is cruel, ruling with absolute power, and has turned the medium to his evil uses. Sheriff Almaguer is the king's man, heart and soul. He hunts "traitors"--those who would stand against the evil King. Garen Demont, leader of the rebellion, has returned from exile, with an army, intending to rid the land of the cruel king.

Many events conspire, which end up with Lia stealing an object of great value from the Aldermaston. She helps Colvin escape, only to run into crazed man who says that she must guide Colvin to Winterrowd, where a great slaughter will happen. From this man, Colvin discovers that Demont has only a tenth of the forces that the King has and has to get to Winterrowd to warn him.

The evil Sheriff Almaguer uses an amulet to bend the medium to his will, and he knows who Lia's parents were. Taunting her and withholding the full complete knowledge of who her parents were, the sheriff hunts Lia as much as he does Colvin.

This is a compelling, well written book. Lia, Colvin and indeed, all the characters in this book are clear, and vivid. The story immediately draws you in, keeping you turning the pages, impatient to find out what will happen next. The mood of the tale is dark, but there is intense love for family here; Lia's love for adopted family who is the staff at the Abbey, and Colvin for his sister who knows not what he is doing. They wish to protect them, but "the medium" may not allow it.


I highly recommend The Wretched of Muirwood--you will want to buy the rest of the trilogy while you are at it!
Posted by Connie J Jasperson at 5:57 AM

This sounds like a great book by the blurb alone, but after that thorough review I'm definitely going to check it out.

Thank you Terri! I hope you enjoy it as much as I did!

I love these books!! Great review!