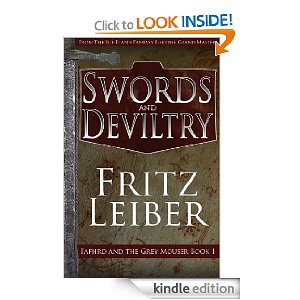 ‘Swords and Deviltry’ by Fritz Lieber


Swords and Deviltry was first published in 1970, by Ace books.  One of the true pioneers of the genre of epic fantasy, Fritz Lieber originally wrote the three main tales that comprise this book as short-stories for several now defunct Science Fiction and Fantasy magazines, with ‘Induction’, appearing in the 1957 collection ‘Two Sought Adventure’ which was later expanded without ‘Induction’ as ‘Swords Against Death’.


‘Swords and Deviltry’ is the first book in the ‘Fafhrd and the Grey Mouser’ series of tales which Fritz Lieber wrote over the span of fifty years.  The book follows the early days of two adventurers who are larcenous, but likable rogues who live in the fantastic world of Nehwon.  The four tales in Swords and Deviltry introduce the duo and their relationship.


‘Induction’ is a short prologue which details the actual moment when Fafhrd and the Grey Mouser first laid eyes on each other, and establishes the backdrop of the world of Nehwon.


In ‘The Snow Women’, Fafhrd is introduced as a young barbarian of eighteen years who is still living in his mother’s tent. More than anything he wishes to see the world, and longs to hear any news of ‘civilization’, and especially the fabled city of Lankhmar. Fearing the dark magic of his mother and obsessed with the need to see the world, a series of events leads Fafhrd to abandon his wife, whom he marries as a last defiant gesture simply because she is carrying his child.  The curses of his Mother and his spurned wife follow him.


Gray Mouser, in ‘The Unholy Grail’ is introduced as a young apprentice magician named Mouse, and the story follows his fearful and gruesome quest to avenge his master’s murder. The dark and emotional quality of this tale is compelling, and it is hard to look away from it, although it is horrifying in places.


‘Ill Met in Lankhmar’ details how the two met and allied themselves with each other, and subsequently lost their loves through dark magic and treachery. Lankhmar is a city that is dank, dirty and full of danger.


Even Lieber’s most avid fans will admit that this book is not an easy book to get into.  Much of his dialogue consists of words that will have you running for the dictionary, and he is very fond of long prose. If you can stick with it, you will find yourself unable to put the book down. Lieber transports you to a world that is exotic, violent and terrifying.  That is part of the enchantment – the feeling that you have entered a truly foreign world where just when it begins to feel familiar, nothing is as you might expect it to be.


People have criticized Lieber’s work for the fact that Nehwon is a world where the women are portrayed as being either evil or weak.  They feel that he despised women, and criticize him for his lack of strong female characters.  I think that if you look at his work in the eyes of 1950’s America, and compare it to all the other popular fantasy and sci-fi of the time you will find that he was really voicing a cultural bias, and it was one that has since been shattered.  Despite that bias, I love Lieber’s work, because it is the gold-standard by which sword and sorcery tales were once measured by, and is the fertile garden in which such modern mega-classics such as the Dungeons and Dragons phenomenon and the Dragonlance empire both have their roots.


Even though this is one of my all time favorites,  I would recommend ‘Swords and Deviltry’ purely for its educational value within the genre of epic fantasy.  I say this despite the fact that in my senior year of high-school I was chastised by my literature teacher and given detention for bringing this ‘lurid’ book to class!  I was then, and still am unrepentant! 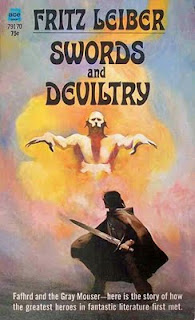 Posted by Connie J Jasperson at 6:29 AM

And another fantastic-sounding book! thanks so much for this blog, Connie - I will never be bored again with all that you've presented to me to read. You rock!

Thanks!! Now if only my actual reading could put a dent in all the things on my Kindle.

I love your blog! Most of these I have read, but you have introduced me to some great new ones that I somehow missed on my own. *gasp* Thanks so much for such a great blog! ~Sabrina