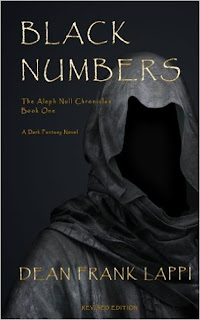 One of my all-time favorite books by indie author Dean Frank Lappi, is his first one, a little thing called Black Numbers.

But first the blurb:

In a land where true magic is based on the rare ability to use advanced mathematics to affect the physical world, those who can control such powers are part of a secret organization known as the Oblate. Over the millennia, they have directed the Korpor, a violent and sexual creature, to roam the land and search for the Aleph Null, the one prophesied to control the mysterious Black Numbers, a power beyond anything ever seen in the land.
Sid’s awakening sexuality and genius-level mastery of mathematics puts him on a collision course with the Korpor and the Oblate, and he soon finds himself on the run from powerful and mysterious forces intent on controlling him and his powers. His journey propels him to the center of an ancient struggle that he cannot understand and wants no part of.
But he is not alone, for the friendships that he forges along the way help him to navigate the dark and chaotic road he must travel.
Can Sid overcome the seductive darkness known as Black Numbers?

This book is in many ways a traditional fantasy, but Lappi crosses the line into horror without losing the qualities that I love in an epic fantasy. We have a true Good vs Evil plot, a completely believable system of magic, incredibly frightening creatures and a plot that would make Clive Barker proud.

In Black Numbers, Lappi has created a character-driven plot with all the elements of the Hero's Journey that true fantasy incorporates, along with the atmosphere of fear that great horror evokes.

Magic is expressed both sexually and through mathematics. The central protagonist, Sid (Sidoro) is a young boy growing up with a hard, uncaring father. Sid's father teaches him how to use mathematics, believing with all his heart that Sid is the Aleph Null - a prophesied wielder of the Black Numbers who will rule The Oblate. However, the dreadful creature called the Korpor must test him, and sexually awaken his numbers.

This is not a story for the weak of heart. Sid's violent and frightening encounters with the Korpor are the stuff of nightmares. Many people want to see Sid dead, because of what he is. Fortunately for Sid, he attracts friends who are willing to protect him, one of whom is Crowdal, a giant of a man who is a member of a race called the Trith.

Lappi has created a tale that makes you both afraid to turn the page, and terrified not to. You want to see what will happen to Sid and Crowdal, and at the end, you are left wanting to read more: Lappi set it up beautifully for the sequel, Blood Numbers. I loved this book!
Posted by Connie J Jasperson at 6:00 AM

Thank you for your wonderful review and support, Connie! Best to you!