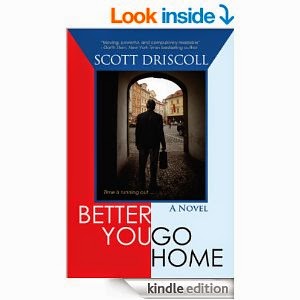 Today I am dipping into the world of literary fiction, with Better You Go Home by indie author Scott Driscoll. Technically this is a medical thriller, but the atmosphere of mystery and illusion, combined with the harsh other-world quality of the old Czech Republic make this novel a fantasy of a time gone by.

The BLURB:
Seattle attorney Chico Lenoch wonders why his Czech father refuses to contact family left behind the Iron Curtain. Searching through his father’s attic after the Velvet Revolution, Chico discovers letters dated four decades earlier revealing the existence of a half-sister. He travels to the Czech Republic to find his forgotten sister and unearth the secrets his father has buried all these years. There is self-interest behind Chico’s quest. Most urgently, he is nearing kidney failure and needs a donor organ. None of his relatives are a suitable match. Could his sister be a candidate? Chico also meets Milada, a beautiful doctor who helps him navigate the obstacles to finding his sister. While Chico idealizes his father’s homeland, Milada feels trapped. Is she really attracted to him, or is he a means of escape to the United States? Chico confronts a moral dilemma as well. If he approaches his sister about his need for a kidney, does he become complicit with his father and the Big Shots of that generation who've already robbed her of so much?

My REVIEW:
I loved this book. Driscoll takes a little step back in time with this tale. He gets into the workings of  human nature, of who we are, who we think we are, and how others see us.

Chico is an intriguing character. The tale is told in the first person, which I usually find difficult to get into as a reader, but didn't in this case. Also something I usually find off putting but didn't in this case is the way Chico occasionally 'breaks the fourth wall'--he sometimes addresses the reader directly. It works, because you are in his head the whole time and it feels perfectly natural.

An attorney, Chico is a fiercely independent man. An example of that independent streak is that he is nearly blind, and yet he insists on driving despite his friends' pleas, because, like a windshield, he can somewhat clear his vision when it gets foggy.

Despite his independent streak and his analytical nature, Chico's childhood memories are illusions and he only begins to realize it when he gets to Písečná. His father is not the man he believed him to be, and nothing is what he expected. Unable to stop thinking like a lawyer Chico asks questions and uncovers a family secret with far-reaching consequences.

The situation he finds his sister Anezka, in is serious and fraught with danger, the Czech Republic is a treacherous, alien world, and like an onion, truth there is concealed beneath many layers. Suffering, hardship, and betrayal lurk around every corner, but sharply juxtaposed against the grimness of that reality is intense beauty. At the heart of this tale are the lengths even the most ruthless of people will go to for a fantasy, an ideal.

Driscoll's narrative draws you in and holds you spellbound to the last dramatic moment. He takes you to a world that is at times incomprehensible to western eyes, and immerses you in that culture. The way the authorities work, the absolute power certain people enjoy is shown with heartbreaking clarity. Love and loss, trust and betrayal, jealousy and all stops in-between--emotions drive this plot to it's stunning conclusion.

This is not genre fiction, instead it is written for mature, dedicated readers who want substance in a book. No fluff here, just good solid craftsmanship. I give it five full stars.
Posted by Connie J Jasperson at 5:35 AM