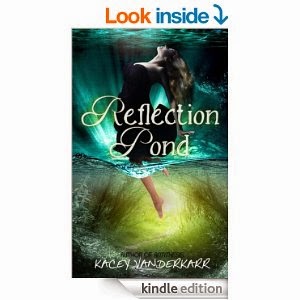 Today I am reviewing a fairly new book, Reflection Pond, by indie author Kacey Vanderkarr. It is an urban fantasy, centering around the concept of the fae world, juxtaposed against the mortal world.

The Blurb:
Sometimes you find home, sometimes it comes looking for you.

Callie knows a lot more about pain than she does about family. She’s never belonged, at least, not until she falls through a portal into her true home. The beautiful faerie city of Eirensae doesn't come free. Callie must find her amulet and bind herself to the city, and most importantly, avoid the Fallen fae who seek her life. Seems like a small price to pay for the family she’s always wanted.

Then she meets cynical and gorgeous Rowan, who reads the darkness of her past in her eyes. He becomes Callie’s part-time protector and full-time pain in the ass. He has secrets of his own for Callie to unravel. What they don’t know is that the future of Eirensae lies with them, and the once peaceful city is about to become a battleground for power.

My Review:
This was a book I might never have come across if it hadn't been for a little serendipity. I happened to meet Kacey Vanderkarr via her book review website. I was hoping to get a review of Huw the Bard, and while she declined to review my book,(it is definitely not YA which is all she reviews) the premise of her book intrigued me, so I bought it.

The blurb makes it sound like a full on romance, but it is not—it’s an adventure with a romance, and there are adult themes mentioned, but it’s not graphic.

Callie is portrayed realistically, and her reactions to the situations she finds herself in are quite true to the way a person with her history might react. Rowan is also quite realistically portrayed, and he too has a painful history.

The politics of Eirensae and lust for power displayed by several of the fae who guard her is well plotted. The fae don't raise their own children, instead they are raised as orphans in foster homes by mortal who are unaware of their true origin. When they come of age, they are brought back, and then they must find their amulet, or be cast out again. That is a really original take on the old changeling myth, one that made sense to me.

This is a good story. There is something about this little adventure that kept me turning pages, ignoring work I was supposed to be doing.

Vanderkarr writes with power. Her narrative sucks you in, and doesn't let you go. My one and only complaint is that while it did have an ending of sorts, it's a set up for the next book, and who know how long before she can get the next installment written. Still, it was a full day’s entertainment, and what more can a person ask for out of a book than that?

I highly recommend it as a New Adult Fantasy, and give it 5 stars.

Posted by Connie J Jasperson at 6:25 AM

Nice review! I prefer my adventures with a little romance on the side, instead of the traditional full-on love-fest. And the foster kid angle does seem like an interesting take on changelings. Thanks for posting! (I'll be sure to stop back for the Writing Process blog hop too!)